Is Spirit Breaker The Worst Hero in Dota? 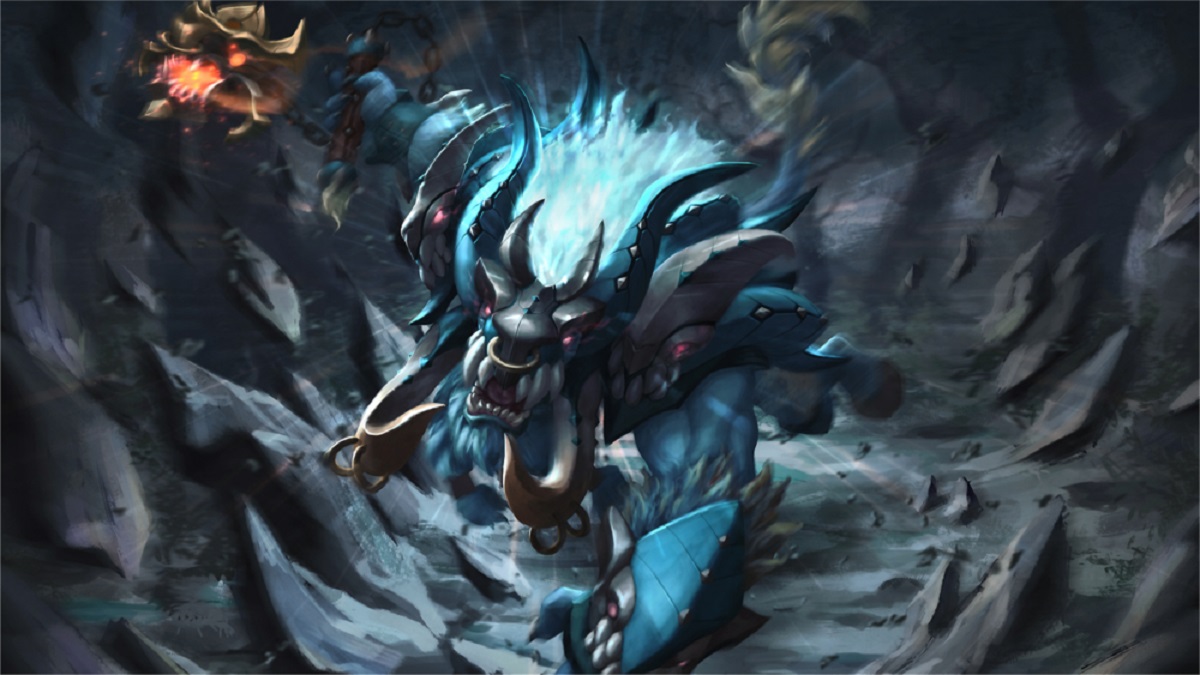 For a long time Dota 2 fans have prided the game as having a much more dynamic metagame than other Dota-like titles. At The International 10 all but seven eligible heroes received either a pick or ban during the draft phase. All but eight heroes were actually played, indicating some form of theoretical viability. If we expand the scope to include the TI 10 qualifiers, which helped form a large part of the TI 10 meta, there was a single hero that was never targeted across all six regions of play.

Barathrum, the Spirit Breaker, was added to Dota 1 in patch 6.07, released in 2005, and holy cow does it show (no pun intended). Over the last 16 years, Spirit Breaker’s core identity as a hero has remained almost completely unchanged. First, you throw your body into the fray while pinging wildly in an attempt to encourage teammates to follow up after you. Then you slam your face on the keyboard activating Bulldoze and Nether Strike while hoping your teammates did indeed follow your crazed aggression. After that it’s a matter of clicking on enemy heroes, praying for a bash and hoping that you judged the strength of your teammates versus that of the enemy team correctly.

Now obviously, Spirit Breaker aficionados will contest the simplicity of the Space Cow. There is certainly opportunity for nuance in how you chain your stuns or line up a Charge of Darkness for maximum impact. However, it’s hard not to feel just how much of a team game Dota 2 is when playing Bara. Without a good farming mechanic (not that he scales particularly well anyway) or enough damage to get solo kills, playing Spirit Breaker puts the outcome of the game squarely in the hands of your allies.

This is not inherently a bad thing. Afterall, Dota 2 is a game about team strategy and coordination. Spirit Breaker thrives when paired with specific heroes that can enable or take advantage of his impact. The bigger issue is that Spirit Breaker is a one-dimensional hero that also has a one-dimensional play style. Unlike another classic roaming hero Tusk, Spirit Breaker will be tasked with charging in to start a fight regardless of how far ahead or behind his team is. Tusk, on the other hand, can achieve game-changing impact in both aggressive and supportive roles. For further contrast, look no further than Marci who was playable in all five roles and with a variety of item builds upon release.

Despite this notable drawback, Spirit Breaker’s stats in public matchmaking paint a different picture than the one told at TI10. Currently, the hero has seen increasing popularity and win rate, especially at higher MMRs. Even leading up to TI10, Spirit Breaker maintained a very steady 50% win rate with a reasonably high pick preference. Since the post-TI patch where Spirit Breaker received very minor buffs to his stats and damage output, the hero has continued to climb in both popularity and win percentage.

This presents us with an interesting question. Did the entire professional community overlook Spirit Breaker? It is highly unlikely that patch 7.30e did enough to truly change the hero’s trajectory. This would mean that Barathrum was already a playable hero and was either forgotten about or simply could not fit properly into a strong strategy. Either way, it points towards the unappealing nature of inflexible, one-dimensional heroes.

In the context of a pro game Spirit Breaker is a bit like that one tool you buy to do one specific job and then leave in the box for the next twenty years. Dota has always been a game about adaptation and the heroes that can fill a variety of jobs tend to be the ones that win the most tournaments. However, for the rest of us Spirit Breaker is an enjoyably simple way to punish the poor coordination and positioning of the average pub game. Small typo in the title don't need the second is

I would consider it a big typo.

SB is a simple hero that works quite well because he does what he does perfectly and doesn't need you, as a player, to be incredibly good mechanically to have a big impact. Of course, if you're a behind in a game you're pretty much the sacrificial lamb that starts the TF, but even then you can at least "do" something. Right now at least by Dota Plus worst hero now is Furion. Idk why people keep crying about heroes that dont get picked in pro games . Sb , same as pre skeleton spelll wk and many other were easy heroes to play . They were easy to play so that player can focuse on the general gameplay and not need to worry about heroes demands in skill. There are begginer heroes in dota , and they dont need to be buffed to the point that they get picked in in tournaments .

Easier to play = easier to counter..

Also, SB is too greedy for a support, doesnt scale as a core.. thats why he's ignored. The hero scales very well. As a core he mostly suffers from too many bad matchups mid and too slow to farm until he has levels and items. just gonna throw that in there. no its not.

Eh he's situationally good, especially with some farm, but he's too easily countered by euls right now to play in pros I'd say

I mean, didn’t Xiao8 run Bara mid when he was standing in for NothingToSay for 1-2 tournaments? They won several matches with that composition. I feel like it’s certainly within reason Same heroes are more geared to be funny pub heroes (spirit breaker, pudge, techie, meepo) and some are geared toward a more organized/professional playstile (Chen, IO). It's perfectly fine. Not every hero needs to fit in the professional scene. The answer is no. Its actually quite legit pos3 hero atm, not the worst pos4 either. Obviously its better in lower ranks, but even in divine+immortal the hero is quite alright, especially as a core. With the aghs build you one-shot waves with charge. You also have a ton of bkb-piercing disable and mobility. He is just great if you can survive the lane :

Hero is fine, on the scale of worst heroes in dota I’d say he’s somewhere in the middle. I could name at least 20 I’d say are worst before spirit breaker comes to mind

I was talking with some buddies about the worst hero in Dota recently and Bara didn't make the list. He isn't particularly great, but I think you can actively win games with him. While I'm no pro I'm still fairly confident there are worse heroes. Huskar, Treant, Bounty, and Centaur all feel worse to me right now. Speed up his BAT and backswing when hitting. He's 100% broken. I see bara picked a lot right now, where's this coming from? He's at the very least a good Marci counter, which gives him something to do in quite a few games right now. The bull has only 5 problems:
1) Extremely small and extremely unstable damage
2) Poor survival rate (too low increase in strength and agility for a hero who has to climb under towers and into crowds of heroes at early levels and with minimal value)
3) It is not possible to mine gold at the expense of creeps (I remind you that there is also not much damage to heroes)
4)Charge is easy to interrupt. Here I think there is nothing to say so everything is clear.
5) There are a lot of unreasonably tenacious heroes in the game now, who cannot be killed for charge + ultimate (which is worth one WR having +3.0 strength per level and complete invulnerability from attacks)

PS: for 10 years in dota I have more than 2k games on the bull and I understand what I'm talking about @ael I know you didn't just link a fucking Rizpol video to show a hero is strong, I could win with literally any hero if I played 5k below my actual rank Dude, in my opinion Bara is a heroe to get fun game, his strenge is a lot, I don't know how ppl say that his strength is low, and who cares about agility if u are strength heroe? strengh heroes normally don't have so much agiity, look at Tiny xD, this heroe is not played right naw, cuz other heroes get extreme buffs and bara doesn't have any change, but, can be the worst? I don'c care, u can get an ez game if u know play Bara or ez lose if u don't know, is not easy to play like someone put in the coments before that, u need to see the minimap all the time, iniciate if u need, u need to buy tanky items, correct use of bull, don't use ulty whathever u want, charge with ur team (except if is a supp and u can kill him and get out fast), but at the same time is too easy to play, this heroe doesn't requiered too much skill to make his combo.

And is not easy to kill him if he has bull, but if he havn't is too easy to kill, but naw, u need to know that he is tanky and his team can come, and like a good bara u had high MS so he is going to try to run on the direction of his team to can comeback in the fight.
Obviusy all of this is in pubs, (rankeds or unrankeds), this in a tournament is totatly diferent, in a tournament Dota 2 transform in other game, proplayers need teamfight and bara is not good on TF, is good on make pickoffs, and pros know how to play against this type of heroes, that's why we don't see Barathorm in tournaments but yes in Pub games, also if u watch proplayer pubs u can se some Bara.... all depends of the type of game u prefer, u can love Pudge or hate him, same with Bara :) please don't play SB as a pos 4... everytime i have one on my team as a 4 we lose the lane and then the game yeye,hero that can create AOE bash is bad XD,also someone said the point of this hero was for beginners. It's ironic because now he seems to be in most of my games these past few days aha. I know what you are saying though, he is quite basic.