Who is Who in Dragon's Blood?

You’ve watched the anime and now perhaps want to take a peek at what that whole Dota thing is about. Maybe you have already read some guides or watched one of the great introductory videos to the game, or even played through the tutorial. But now, with over a hundred free heroes available to you from the very start, perhaps you are feeling slightly overwhelmed and looking for familiar faces. Today we are going to skim over the Anime lineup and maybe find a hero that suits you.

The main protagonist of the anime is one of the most versatile core heroes in the game. He can be effective in all three core roles, though carry DK is usually not the best idea.

The main strength of the hero is that he is incredibly tanky and has a very straightforward and very powerful stun in Dragon’s Tail. What it means is that he is at his best when played as a tanky frontline hero, most commonly being the first to initiate. “Brave, but stupid” is unironically the preferred playstyle for the character.

Do not expect to deal a lot of damage or be able to solo carry the game, but do expect to have fun playing aggressive and high-impact Dota as soon as you get your Blink Dagger and BKB.

Mirana is another highly flexible hero who is usually played as a position four support in the current meta. That means she has some farm and she is usually free to leave her lane quite early.

Mirana, especially in beginner games, is almost fully about landing Sacred Arrows. Very few things beat a long-range, long-duration disable. The hero also has access to a lot of extra magical damage through Starstorm, though mana issues typically prevent Mirana from utilizing it as often as she wants to.

For mana reasons, and as an extra self-setup for Sacred Arrow, Mirana players in high-level games usually go for Eul’s Scepter of Divinity. It is a great save for the hero as well and is a good starting point on learning why save items are important in general.

In-game Luna more than lives up to her bloodthirsty anime adaptation: the hero is mostly known for her ability to farm exceptionally fast by killing peaceful jungle dwellers. All the gold you get from it will almost definitely help you forget what you’ve done.

This is incredibly important in lower level lobbies where, truth be told, no one knows how to farm. Luna just does it well by default and it is actually hard to be poor on the hero. You will have money and sooner or later you will learn to utilize it well.

The hero is great at teaching beginner players about various potential builds, the tempo vs. farming items and, perhaps most importantly, about how important Black King Bar is on agility carries.

Another flash-farming hero suitable for players who don’t mind playing PvE for ~20 minutes. Compared to Luna, farming as Terrorblade will definitely take a little bit more effort, as it involves macro-ing several illusions.

The trade-off is that Terrorblade scales incredibly hard, possibly being the hardest hero to deal with in the late-game. His Agility growth ensures high attack speed, high damage and last, but definitely not least, an absurd amount of Armor.

This is probably the best hero to introduce new players to some level of micro. Terrorblade illusions are disposable, don’t cost much, don’t give a ton of bounty and are not always critical to his success in teamfights. A great environment to learn an advanced mechanic, without being punished too hard for inevitable mistakes.

In theory, Marci's playstyle is not too dissimilar to what Dragon Knight wants to do. She is a jump-in, intiate type of hero, but she trades quite a bit of Davion's survivability in favor of having innate mobility and higher burst damage. Utilizing it well isn't particularly hard, but still requires higher understanding of the game.

For the most part it is a question of target prioritization. Especially before Marci has her BKB. She needs to understand who her priority target is, how fast she can kill it and what potential counterplay might come out. That necessarily requires understanding most Dota heroes and having an intuitive feel for them.

She is also a lot of fun to play and has a very active playstyle, similar to Davion. If you don't mind doing some extra reading before the game starts, learning what heroes do not only by facing them on the battlefield, but also by studying them outside of it, Marci can be a good beginner hero. Otherwise it is better to start experimenting with her once you have a couple of dozen games under your belt.

Lina is primarily a midlane hero in the current patch, but she was a very successful position four not so long ago, before the nerfs. We strongly advise against position four Lina for beginners, but when it comes to midlane, she can be quite potent.

The hero has a lot of damage, with access to magic nukes, strong physical right-clicks and potentially even pure damage ultimate. She more or less can’t lose the middle lane: Dragon Slave is usually enough to ensure last hits and provide some harass on the opponent, while extra ~12% of attack range compared to most other ranged heroes allows Lina to stay safe most of the time.

That said, executing the hero past the laning stage can be kind of hard. She heavily relies on positioning and movement speed to stay alive and once the enemy heroes start getting gap-closing items, the game can become really frustrating. Overall, a very high-risk, high-reward hero for those who are capable of keeping their cool.

Crystal Maiden is often suggested for new players and it is possibly one of the worst suggestions in the entire game. She is, unironically, one of the hardest support heroes in the game to play well.

Incredibly low movement speed, HP pool and armor make her a juicy target for pretty much every single hero in the game and she can’t even have absolutely explosive games like her sister to compensate for it.

On the other hand, if you want to force-learn what positioning is all about as soon as possible and don’t mind playing Dota as some sort of survival horror, you are welcome to try Rylai. We warned you.

원소술사 — not recommended for beginners

Invoker is hard for obvious reasons: there are no heroes like him in other games and the sheer mechanical complexity of this single character is not dissimilar to a character from a fighting game. Only you have to worry about the whole strategic layer of the game, while also facing more than one opponent at the same time.

Invoker is best left for when you feel comfortable with the flow of the game as a whole and understand most macro game concepts well. This way you will be able to fully concentrate on learning the actual hero and how to best utilize his abilities

Winter Wyvern is the least recommended hero from the anime and for a good reason: unlike other heroes discussed today, Wyvern can actually be harmful to her team, when not played well.

She has high damage for a support hero and an absolutely devastating ultimate, if it is used right. She also has one of the best saves in the game that can essentially kill her teammate, if not used properly.

Wyvern is best left for when you understand what most heroes do and have an instinctual feel for most of their abilities. Otherwise, split-second decisions with Cold Embrace usage can be less than ideal.

What are your thoughts on the anime? Do you agree with our assessment of the characters and what heroes do you hope make an appearance in Book Three? Share your thoughts in the comment section below and let us know if you want a more in-depth look at some of these characters. 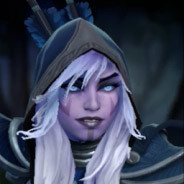 Terrorblade not recommended for beginners in the slightest.

Still the article is really good. its a pangolier but not the pangolier donte panlin we have in the game, same like the oglodis who looks like axe and disruptor as they come from the same tribe, also asar, who looks like ursa, and many other cameos

Good article. Really CM is not for beginners since they added so many gap closers + indirectly nerfed arcane aura by allowing personal couriers.

The real question is - do I have to learn how to use Netflix to watch the series?

How mirana is recommended for beginner.. arrow require a lot of intuition and luck factor, while his ss need a a lot of teamwork follow up..🤔 Who care, this sh*t not even canon...